Does anyone remember the first two movies of the Terminator saga? For me, the best ones.

Both starring Arnold Schwarzenegger as The Terminator and Linda Hamilton as Sarah Connor.

Directed by James Cameron in 1984.

Terminator, model T-800, is a cyborg assassin who comes from the future and pursues the defenseless Sarah Connor to kill her before she gives birth to John Connor.

John Connor is the leader of the human resistance in the future and they fight against Skynet, an artificial intelligence that wants to destroy humanity.

He sends a soldier from the future, Kyle Reese, to protect Sarah. They fall in love and she gets pregnant with John.

Also directed by James Cameron in 1991.

From the future come Terminator, The T-800 (Arnold Schwarzenegger) reprogrammed to protect John, still a child and the T-1000, an improved version whose goal is the opposite.  To kill John.

Terminator and John rescue Sarah Connor from the mental hospital where she is confined because no one believes her story about the future.

Now she is ready for the fight and wants to destroy Skynet’s creator. Sarah is no longer that fragile character from the first movie. She is trained to kill.

They do not have it easy because the T-1000 harasses them at all times.

If you feel like watching the complete movies: Terminator  and  Terminator 2, Judgment Day. Both on Amazon Prime Video.

The importance of Linda Hamilton in Terminator 2

When James Cameron called Linda Hamilton to discuss her role in the second film, she said she wasn’t going to play the innocent waitress in the first film. She told him what she wanted and the script was written that way because of her. She changed Sarah’s attitude and image. And for a few months she trained very hard, preparing her body and learning how to use weapons and fight. She had just given birth two weeks before!

This is explained by themselves in this video:

In this second film of the Terminator saga, Sarah wears these iconic Matsuda sunglasses, the 2809H from 1989, while reflecting on:

She only wears them for a minute but the scene is a close-up of her and they can be appreciated quite well.

They perfectly complement her new personality.

Now, Matsuda has re-released these 1989 sunglasses in their V2 version with some minor changes.

An engraving on the bridge and thinner rim thickness.

There are only 500 pieces of each color in 4 colors for worldwide.

Matsuda 2809H-V2 Heritage is a model from the Heritage collection.

They have a protective shield on the sides made of titanium and acetate.

They are made of very light titanium and japanese acetate.  The temples are decorated with an engraving. The round lenses have 100% UVA and UVB filter, with anti-reflective coating.

How to get these wonders?

Here you have the model Matsuda 2809H-V2 Heritage in different colors.

You may also see our selection of Matsuda glasses.

If you are curious and want to know more about Matsuda read our post “Matsuda, innovation and experimentation”

Contact us by sending a message through our contact form if you don’t find what you are looking for.

Have a nice day! 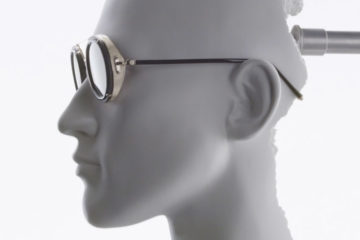 You can find out more about which cookies we are using or switch them off in settings.

No products in the cart.

Your wishlist is currently empty.

This website uses cookies so that we can provide you with the best user experience possible. Cookie information is stored in your browser and performs functions such as recognising you when you return to our website and helping our team to understand which sections of the website you find most interesting and useful.

To know the language of your browser and we can offer you an experience in your language:

This website uses Google Analytics to collect anonymous information such as the number of visitors to the site, and the most popular pages.